Welcome to State Of Slay™

State Of Slay™ is meant to be a safe place, a place to encourage one another, to share our experiences, and offer our strengths and hope to those who may need it, negativity is not welcome here. I encourage you to look for the commonality in what is said here, not the differences, and I invite you all to share your thoughts and stories with me, as I will with you. Together we will be a force to be reckoned with, instead of walking around in a state of depression, anxiety, or self-doubt, we will walk around in a STATE OF SLAY™.

Searching For Something Specific Slayer?

The Zoom screen opened at 10:45 a.m. Samantha Crowel’s mom and dad walked her into the frame. She wore a short white dress and held a bouquet of white roses.

Samantha Crowel’s grandfather Santo Giovanni Melchiorre, 96, was stuck in a rehab center in Fort Myers, Fla., when Crowel married Austin Kiesel on April 18. So Crowel and Kiesel brought the wedding to him.

Friends and family of Crowel and her fiance, Austin Kiesel, squished themselves onto couches and plopped into desk chairs so they could see themselves in the frame.

Some of the Zoom guests applied makeup or put on a dress shirt, while others wore quarantine casual.

Start the day smarter. Get all the news you need in your inbox each morning.

The most important guest, Crowel’s 96-year-old grandpa, Santo Giovanni Melchiorre, wasn’t visible in the frame, but he had a great seat.

He sat in his wheelchair 6 feet from his granddaughter, just inside the front entrance to the Skilled Nursing Facility – Gulf Coast Medical Center in Fort Myers, Florida. He wore a blue-and-white checkered mask.

Crowel, 22, lost her grandmother in February and one of her grandfathers in March.

Melchiorre, whom everybody calls John, is her last living grandparent. He is a dialysis patient at the nursing facility. Crowel says the family is lucky because they get to stand 6 feet away from him three times a week as he is transported to and from the center.

Every time he saw Crowel’s mom during those short visits, he asked, “When is Sam getting married?”

The wedding shifted back to April 18 but moved online – a Zoom wedding in Crowel’s backyard. Then Grandpa John got an infection. He couldn’t leave the rehab center, but Crowel was not about to do it without him.

When Sam was a year old, her parents quit their jobs and moved to Fort Myers, Florida, to live closer to her grandparents.

When Sam would visit, she would sit on the kitchen table and put her feet in Grandpa John’s lap as he made up stories. They were all different, but her favorite ones were those about the Native American statue he had in his house.

Eventually, she had to be limited to one story per visit.

Grandpa John was a crier when it came to family matters. He even cried at his grandson’s hockey games, win or lose.

Five years ago, Grandpa John moved to the same neighborhood as Crowel’s family. He thought he was going to die soon, and he wanted his wife to be close to family when it happened. He was older and had always had issues with his kidneys, but it got worse, and he was too old for a transplant. Two years after the move, he started going to dialysis.

His family expected him to die first, because his wife was 15 years younger. She died in February.

Crowel used to see her grandfather almost every day. Now, she sees him about once a week for a few seconds as he gets on a bus. He still keeps tissues on him at all times.

The flowers had been placed. A trash can and a bench were cleared away.

Crowel wore a white lace dress she purchased online from LuLu’s. That was her something new.

She borrowed a blue earring from her mom and pinned it to her dress. She wore a pair of old earrings from her grandmother. There was no aisle, no music, but her parents each took one arm and walked her to her waiting fiance.

On the walk, the three joked about how Crowel’s dad needed to make sure not to faint, like he almost did at his own wedding.

In the corner of the entrance to the rehab center were all the people Kiesel and Crowel had been quarantined with for the past few weeks, as well as some nurses and Grandpa John.

The guests wore face masks. They stood 6 feet from everyone else.

They had only a 15-minute window before Grandpa John had to get on a bus to get to dialysis.

Their friend Jack gave a short speech, remembering the first time he met Kiesel – during a Little League baseball game in which they were on opposing teams – and about how Crowel played varsity lacrosse – which he joked was a “club” instead of a sport.

The couple said their vows, kissed and finally unmuted everyone in the Zoom call.

There was a unanimous uproar of “Congratulations!”

It was hard for Grandpa John to hear Crowel over the 6-foot separation and the mask. He said he loved her. He blew her kisses. And Grandpa John cried. 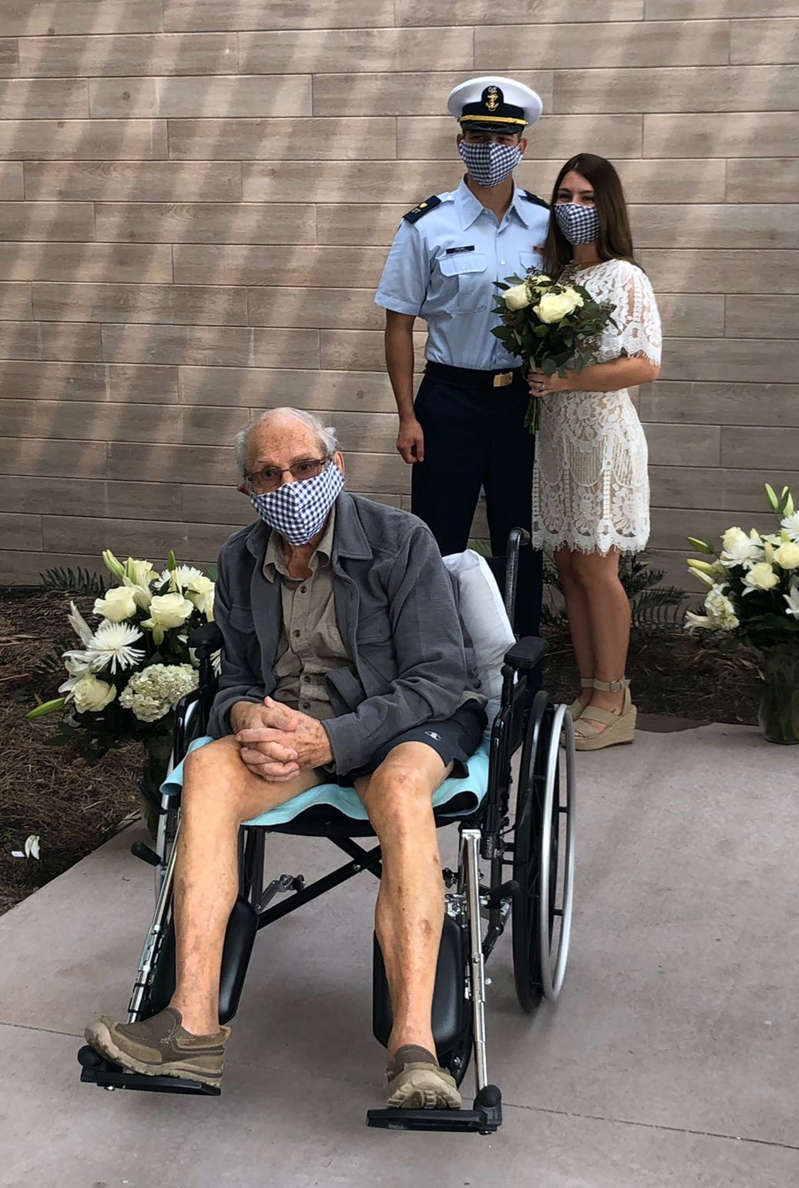 Hey SLAYER! I’ve started a new series of posts called SLAY IT FORWARD. Each post is a submission from you of an act of kindness you have received or have witnessed that has inspired you. Let’s remind each other what’s important during this time and spread kindness… SLAY IT FORWARD.

To submit your own SLAY IT FORWARD story email me at carrie@stateofslay.com

I am an actor, producer, writer, mental health and addictions speaker, and champion of the underdog. View all posts by Carrie Genzel